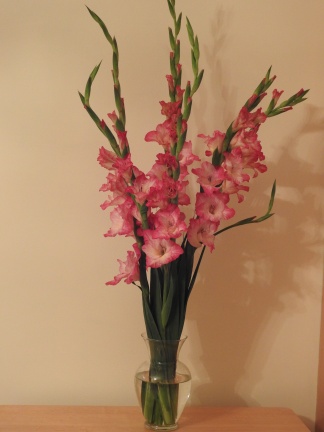 Received these lovely gladiolus from a friend today.  The best kind of gift is the one you never expected.  Gorgeous!  The nature of Maine is seen not just in our woods and shores, but in the smiles of friends and neighbors and colleagues who reach out in kindness day in and day out.  It is in the generosity of the second hand clothing shop owner who can’t make ends meet but still gives to the local youth who are so in need.  It is the grocery store clerk who actually cares if my heel is healing, and the post office master who will miss seeing me once my new job takes me west out of town rather than east.

Snapped some photos tonight of the rosa rugosa growing on the side of the house.  Can you smell it?  Close your eyes and think of the beach.  These roses remind me of my childhood home, since we had a hillside of rosa rugosa that bloomed each summer.  I remember the smell of the roses and fresh cut grass – my father pushing the mower on our small bit of lawn out front.  Once my mind wanders to my childhood home, it quickly expands to include the neighbor’s house – that of my second family (mentioned in The Fresh Air Fund).  There was something special about those families, those houses, that short period of time (ten years, maybe?) before serious illness in each household turned our lives upside down.

­­­I think I’ve got the history of these houses mostly right – pieced together from listening as a child.  The houses were nearly identical.  They’d been built for a pair of sisters after the First World War, in a quiet residential neighborhood in a small New England mill town.  The trees that lined the street had not yet succumbed to Dutch Elm disease, and the depression that would cripple the mill had not yet descended on the town.

The houses cannot easily be described b­y reference to a particular architectural style:  They were not as splendid as the soaring sea captains’ homes that run along the rises of land in towns where the rivers turned tidal.  Nor were they grand colonials or pretentious federals or ostentatious Greek revivals.  They were not precursors to the uninspired modular homes of today, or to the fractured ranches that were built without a sense of unity but rather separateness, floors disconnected and hallways tight and dark.

The houses were most similar, perhaps, to the ubiquitous Capes that became so popular at the end of the Second World War.  They were more generous in proportion, however, with high-peeked roofs bursting boldly into the air, and spacious front porches encouraging neighbors to gather.  The houses lacked the Capes’ submissive uniformity: there was no shrinking back from the road to line up with a row of identical houses, no hunching under diminutive second floor dormers.

The neighbor’s house was buttercup yellow with shutters painted the deep green of pine needles in high summer; ours a simple white with black slatted shutters.  There were patiently tended flower gardens in the side yards, anxiously tended vegetable gardens in the back.  Inside, the houses were not fancy, but neither were they plain.   Fifteen feet of neatly trimmed grass separated each house from the sidewalk. We never minded the proximity to the road.  We had a white picket fence, after all.  Now the fence is gone.  Our families moved away long ago.  Life changes.  I think it is better not to look back, though I do make my husband drive down my old street once every few years, when we are passing through to another town.  Funny how things seemed so much larger when we were young.