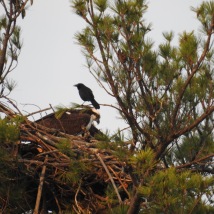 Two nights ago my husband said coyotes woke him out of a sound sleep sometime before dawn.  A conversation later in the day with our neighbor confirmed that at about 3:30 am on Memorial Day the field on the opposite side of our private road had at least several coyotes in it.  And last night hubby’s sleep was somewhat interrupted by “my owl friend.”  By this he means the owl (surely there is more than one, no?) that I was hoping to photograph several nights ago on a sunset paddle along our waterfront.  We are both terribly light sleepers, in truth, and we wouldn’t trade our slice of heaven for anything, rowdy owls notwithstanding.  (Okay, maybe we would trade it for something, but let’s not quibble over my use of hyperbole.)

Last night  I watched while a rusty blackbird (Euphagus carolinus) landed on what appeared to be an osprey’s head.  (I was counting on my camera to tell me the truth once I uploaded photos at home.)  There was a slight breeze on the lake and so my kayak was bobbing just enough in the waves to make shooting hard.  I quickly paddled backwards into a small grove of trees to anchor myself and spent about 90 seconds watching this small bird drama unfold.

The osprey was a good sport about this small indignity, although I believe her expression post-blackbird gives us a sense of how she really felt.  (Thanks to  Bernd Heinrich – nature writer and scientist – for making it okay to anthropomorphize.  I can’t spell it or pronounce it but I know what it means, thanks chiefly to Bernd’s honest and tireless defense of attributing human behavior and emotions to other animals).  And even better was the confused expression on the face of the juvenile osprey.