Thankful for another day of blue skies and temperatures in the high 80s. We are on “staycation” so the weather suits us perfectly.  If I had to be in my office I’d be climbing the walls.

Busy day today with too many obligations away from the house.  Voluntold my husband to take me for a motorboat ride this afternoon so that we could identify the stretch of shoreline that I’ve been assigned to monitor for milfoil.  After we found the location we took a short boat ride  and ended up mesmerized by a pair of loons that were bathing and fishing.

I took over three hundred photos of the loons and need to sort through them to find the best ones.  The male of the pair (I think it was the male because he was larger) was acting like my younger dog acts when she is in a silly mood – lots of wiggling and similar joyful movement. I’m sure the loon’s behavior was typical preening and bathing but it looked for all the world like he was just goofing off.  Can’t wait to review those pictures more closely, do some research,  and share my absolutely unscientific conclusions with you in the next few days.

On my way back to the house after our ride the shadow of a wagging tail under the deck drew my attention.  Note in first and fourth photos that there is a bird on the handle of the lawn mower wagon and a shadow on the house foundation beneath.  I snagged a few photos of this new parent (the chicks are still in the nest and appear to be doing okay) and I couldn’t help but think this phoebe looks like a worn out new father.  He looked perplexed and exasperated, but really he was catching bugs. 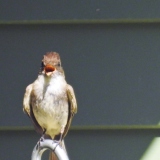 The temperature under the deck was at least 90 degrees (I checked) and so after I finished the phoebe photo shoot I grabbed a dog bowl and filled it with fresh water, then put it on a pile of slate stacked conveniently beneath the nest.   A crude bird bath for certain, but better than nothing for the balance of the afternoon, as I had to leave and didn’t have time to do more.  Granted the phoebes are 300 feet from a lake, and I’m sure they are meeting their hydration needs somehow…..and my husband figures (probably wisely) that these birds aren’t likely to start drinking out of a shiny bowl….but the effort cost me 3 minutes and 16 ounces of water.  Drink up, hot birds.